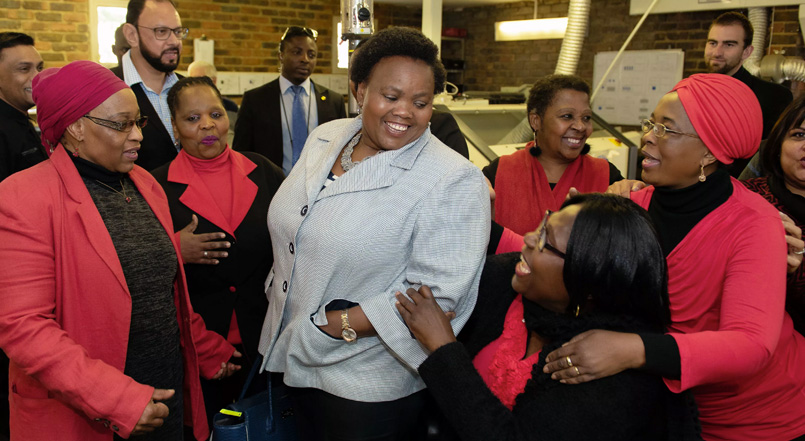 24 July 2018, Midrand – leading provider of equipment to the CIT and banking industry AllCash Technologies hosted a livestream panel discussion and demonstrated solutions sorely needed to address the current crisis with regard to CIT vehicle attacks and cross pavement robberies.

AllCash Technologies spearheaded the initiative to bring the country’s key role players together into one room as part of a panel discussion led by Anti-Crime Activist Yusuf Abramjee.

King said today, ‘There have been nearly 180 attacks on CIT vehicles and CIT crewmen in terms of cross pavement attacks in the first seven months of this year.’  That’s almost one attack per day.

Among the key issues highlighted were South Africa’s current lack of legislation to ensure that cash is carried in approved devices, the concern about the high calibre of firearms in use during these heists, as well as the need to gather deeper intelligence, and secure long-term convictions.

In addressing approved devices which are technically capable of protecting lives, and deterring crime, AllCash gave real-life demonstrations of two such devices in action: the Polyurethane Dispensing Unit (PUDU), as well as a cross pavement carrier protected by ink dye stain.

Attendees were able to witness the PUDU’s Foam Dispenser in action. With no dependency on the crewmen to activate the system, it deploys automatically when the vehicle is shot at or forced off the road. It can also be activated remotely by the control centre monitoring the vehicles. Within seconds of activation, bubbling foam encapsulates the cash and other assets within the vault, hardening into a solid block within two minutes, preventing access to the cash.

In the cross pavement carrier demonstration, attendees saw how remarkably fast the trigger release activated in three stages – an alarm, plumes of vividly red external smoke and, most importantly,  banknote staining. The protective ink dye stain has passed the requirements of the SA Reserve Bank to effectively stain 100% of the notes up to 40% of the surface area of each note with internationally accepted ink dye, which renders the note useless for circulation.

Abramjee said it was necessary to ‘use technology to ensure that cash vans and guards are protected.’

The MEC said her department will be looking at legislation to ensure that minimum standards are applied to ensure safety, saying it was important to see measures such as banknote staining in wider use in South Africa.

King also emphasised the need for all South Africans to adopt a mantra that ‘a stained note is a stolen note.’

All key role players were in agreement that it is time for partnership in fighting this cash-in-transit heist scourge.

King said, ‘The time has definitely arrived that all the stakeholders need to sit up and to start supporting each other. And when I talk about stakeholders, I mean the police, the criminal justice system, the crime intelligence, the CIT companies, the retailers, the insurers, the banks, the security risk consultants, all the technology suppliers.’

Gauteng Head of Visible Police Brigadier Joseph underscored this statement when he said, ‘If we are not all together in this, we are lost.’

This became particularly clear when the discussion focussed on gathering intelligence.

De Kock voiced his concern that in various industries across South Africa, including the academic, research, media and CIT industries, we have ‘reached a very low point in analysis’, that we are referring to ‘urban legends’ rather than working with ‘pure data.’

Data, he said, has to be analysed on a daily, 24-hour basis.

Mashaile agrees. ‘We should be obsessed with data.’ he said.

In restoring calm, sanity, safety and security in this industry, Mashaile believes we have to deconstruct the very chain of the criminals. He believes collecting intelligence, data, and information, as well as the lifestyle profiling on people operating within the CIT industries is key to creating a solid plan that will disable the modus operandi of the criminals.

And while Nkosi-Malobane made it clear that she wasn’t there to reveal their strategy in dealing with cash-in-transit heists, she did say that intelligence and detection capacities were in the process of being addressed, already in some cases leading to the ability to stop crimes before they are committed.

She also spoke of the increased number of people involved in fighting this particular crime as well as the establishment of a special task team that focuses on those violent crimes that strike fear in our communities, including CIT heists and murder, saying that it was not only vital to protect people, but also to restore hope.

As for the criminals, she had a particularly powerful message to deliver.

‘We are ready.’ she said. ‘We won’t only protect the money that is in those vaults but we will also protect the lives, the innocent lives, of people on the ground.’